Valdosta, Ga., is a town of about 45,000 people located just north of the Georgia-Florida border, about 35 miles from Tallahassee, Fla. The town was founded a generation after the end of the Civil War in the scrub pine forests of South Georgia and grew as a shipping point for lumber and cotton.Valdosta is known for one thing above all else—winning high school football.

A sign out on the interstate announces that motorists are coming to “Winnersville, USA.” Indeed, the Valdosta Wildcats have won more football games than any other high school program in the nation. Wildcat teams have claimed 23 Georgia state championships over the years along with four mythical national titles. In addition, Lowndes County High School, located outside of the city limits of Valdosta, has won five state titles, four in the past dozen years.

The Wildcats play in 11,500 seat Bazemore-Hyder Stadium at Cleveland Field. The stadium was completely renovated following the 2003 season and has amenities associated with the best high school stadiums in the country. The program’s first demi-god was Wright Bazemore, who coached for some 29 years through the 1971 season and won 15 state titles. Nick Hyder is the second legendary coach. When Bazemore retired, Charlie Greene took over for two seasons and went 17-3. He did not win a region championship and was fired. Hyder took over for the 1974 season and coached through the 1996 season. He died in the school cafeteria of a heart attack in May 1997. In his 23 years as coach, Hyder’s teams won seven state titles.

Since then, the program has had four head coaches. One coach won a state title in his second season and was fired a few years later. The latest coach to walk the sidelines is Rance Gillepsie, who took over in 2010. Gillepsie’s first team went 11-2 and reached the state quar 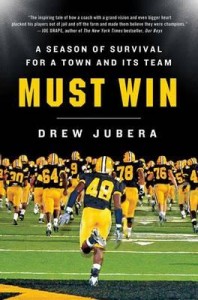 terfinals. His second team finished 8-3 and lost in the first round of the playoffs. This year’s team is 7-3 heading into the playoffs.

Drew Jubera was a reporter for the Atlanta Journal-Constitution for over 20 years. In 2009, he wrote a piece for the New York Times on Valdosta football.  From that article he developed the idea of following the program closely for a year and writing a book titled “Must Win: A Season of Survival for a Town and Its Team” about the experience. This had first been done in 1988 when Buzz Bissinger wrote Friday Night Lights, a behind-the-scenes look at Permian High School’s football program in Odessa, Texas. That book eventually was made into a hit movie in 2004 and a popular TV series after that.

Jubera was able to gain permission from the school board, school administrators and the Wildcats’ coach, and in the spring of 2009 he rented a house in Valdosta and began to spend time with the team covering spring practice. The team was coming off of a 7-4 2009 season and had no quarterback. Almost 30 players were in danger of becoming academically ineligible, and some players had recently been in jail.

Valdosta has a city school system that is surrounded by a more affluent county system. The city is landlocked, and the school has 1,800 students.  Lowndes County High School has almost 3,000 students. From an enrollment standpoint, the Wildcats should compete at the next-to-largest classification for sports; but, tradition dictates that this will not happen. The school’s white, non-Hispanic enrollment is 40% of the student body. Almost 2/3 of its students qualify for free or reduced-price school lunches. It has many of the problems of a typical inner-city school.

Yet its football booster club raises vast amounts of money each year. Its head coach is paid some $100,000 per year and receives the use of a leased truck courtesy of the booster club. He also has free cell phone service and a number of other perks.

Many of the school’s players are the sons and grandsons of former players. The widows of former legends Bazemore and Hyder have their own parking spaces in the VIP area at the stadium. Former assistant coaches sit together at all home games. From the late 1950s to the late 1980s, all home games were sellouts. Even today, season tickets are often bequeathed by will to the next generation of fans.

Jubera captures the passion and over-the-top quality of the support for the program. One of the first stories he relates is when Coach Gillepsie and his wife came to town to interview for the job. They were taken by one of the key boosters to a local cemetery and shown the graves of the former coaches, Bazemore and Hyder. The booster told the Tomberlins that they too could be buried there if he were successful in the job.

The book weaves in the story of a former star who went on the college glory and then returned to town after a pro football career only to be shot and partially paralyzed in a drug deal gone bad. Jubera focuses on the father of the second string quarterback who moved with his son 60 miles from Waycross, Ga., in the spring of 2009 so that his son could be the quarterback for the mighty Wildcats. The father was at every practice and frequently berated his son in public for poor performances.

Gillepsie and his staff work 70 or more hours per week trying to get players academically eligible, as well as taking care of regular coaching responsibilities. They drive players home from practice and, even in one instance, find a player a home after he is placed in foster care and then evicted from that home the week of a big game. The staff constantly struggles to keep the players focused and to get them to ignore the distractions of street life.

Valdosta’s relationship to its high school football team may be extreme, but it is not all that different from what many communities across the country experience. Players who are 17- and 18-years-old are treated like rock stars. Rules are often bent to ensure that the best players can remain eligible. People organize their lives around the local team, and when the team does not meet expectations, lives are unfulfilled. Many of the adults that Jubera encounters are dealing with the reality that their own playing days at Valdosta, where the best times of their lives and everything since has gone downhill from there.

“Must Win: A Season of Survival for a Town and Its Team” is an excellent read for anyone interested in the intersection between sports and society. Once you pick the book up, you may not be able to stop until you have finished reading every page. You will experience a range of emotions while reading the book—much like athletes do when playing a sport.

Greg Tyler is the Library Director at the United States Sports Academy. Tyler has also taught courses at the Academy in sports law. He worked for years in youth sports as a coach, league administrator and as a soccer referee. He has a law degree and practiced law for a number of years.