Women turned off by the prospect of their man turning on to watch the start of the new football season have no need to fear.

According to new findings gathered by the University of Bristol and commissioned by PUMA, men told scientists they felt as much affection for their football team as they did for their loved one, however, their unconscious stress levels tell a different story. 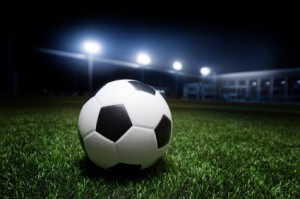 Used to uncover fans ‘true’ feelings the scientists focused on the participant’s implicit reactions to their tests using a Skin Conductance Response machine. This allowed them to find out exactly what participants were thinking, even when their actions may have suggested otherwise.

The major finding of this ongoing research is that men, in fact, love their wives more than they love football. Before the experiment, the group of fans had expressed that they loved both equally, but their significant unconscious stress reactions proved men’s love for their wives and girlfriends is much stronger than they realize (or dare to let on).

Taking things one stage further, after the scientific tests conducted by the university were over, fans were given two voodoo dolls, one representing their partner and the other their team’s star player. The dilemma facing them was to stick a pin in their other half and put her in bed with flu for a week or place a pin in the team’s star player and see him miss a vital game.

James Cossey a Newcastle United season ticket holder for 12 years, who has only missed two games in that period, decided there was only one choice. “When it came down to it, I just couldn’t have Jonas Gutiérrez missing a game, so I stuck the pin in the missus.”

The research was carried out by researchers at the University of Bristol’s School of Experimental Psychology and led by Dr. Bruce Hood and Dr. Marcus Munafò, who are both experts in the fields of developmental and biological psychology.

Dr. Munafò said: “Men in the UK and around the world are undoubtedly passionate about the beautiful game. What we set out to do was measure it in a scientific way and particularly focus on using techniques which allowed us to find out what they (the fans) were secretly thinking even when their actions may have been telling a different story.”

The first stage of the research has been submitted to a psychological journal for publication later this year. But with the aim of broadening the scope of the investigation around the world, the school is now calling for fans of any football team to get involved and take the love or football survey at www.loveorfootball.com.

This story first appeared in the Sport Intern in a blog produced by Karl-Heinz Huba in Lorsch, Germany. Mr. Huba can be reached via email at ISMG@aol.com.  This article is reprinted here with the permission of Mr. Huba.