The media and all of its pundits have heavily debated the landmark ruling by the U.S. Supreme Court on the Affordable Health Care Act signed by President Barack Obama on March 23, 2010. Many people have already weighed in on the legal merits of the case and on its impact on healthcare in this country and on its economic and political ramifications.

The written opinion in this case is long and at times difficult to read and understand. From a legal standpoint there are really only two significant points that are articulated by the Court.

First, the opinion states that Congress cannot force states to participate in an expanded version of Medicaid by threatening to withhold all Medicaid funding from states who do not comply with that portion of the law.

The federal government currently reimburses states about 57 cents for every dollar spent on Medicaid payments.  The healthcare law contains a provision that requires the federal government in 2014 through 2016 to reimburse states at a 100% rate, if they expand Medicaid coverage to include anyone living in a family whose earned income is 133% or less of the figure considered to be at the poverty level. That level is currently just over $25,000 for a family of three people. So if a person is in a family that has an annual earned income of about $33,000 or less that person would be eligible for Medicaid under the more liberal standards of the new law.

The federal contribution will slowly decline between 2016 and 2020 until it reaches 90% in 2020.  The law as originally written would have cut off all Medicaid funding to states who refused to adopt the expanded law. The Court’s opinion stated that Congress cannot utilize such a draconian tactic. The justices reasoned that Congress can easily fix this problem by amending the law to allow partial Medicaid reimbursement to states that do not choose to adopt the expanded standards in 2014. 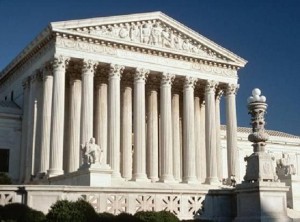 The second major point to remember about this decision is that the Court has ruled that Congress does have taxation powers under the Commerce Clause of the U.S. Constitution and under the 16th Amendment to the Constitution (passed in 1913). This taxation power is broad in scope and Congress can levy a “tax” in the form of a penalty in 2014 and beyond for people who refuse to comply with the new law’s requirement making it mandatory for almost everyone to purchase health insurance. This power is reserved for Congress and the states cannot pass laws blocking such a move by Congress.

Lost in all of the commentary about the Supreme Court decision is the impact that the new law may have on the health and welfare of the American people. A recent report by the advocacy group, Families USA, contained numbers on people in the U.S. who die because of a lack of healthcare coverage.  The report built on data supplied by the National Institute of Medicine that concluded some 18,000 Americans between the ages of 18 and 64 died in 2000 because of lack of access to medical care. By 2010, that number was estimated to be 26,100.

There is no question that people in America are overweight as a group. People suffer from a number of ailments associated with obesity such as Type-2 diabetes, hypertension, joint problems, etc. News outlets constantly air stories calling on people to eat better and to exercise more.

The American Council on Exercise (ACE) issued a press release shortly after the Supreme Court issued its ruling in effect upholding the Affordable Healthcare Act. The ACE statement indicated that now is a good time to remind everyone of the importance of leading a healthy, active lifestyle, as emphasized by the statement of ACE President and CEO Scott Goudeseune.

He said: “As America moves into a new age of healthcare, it is now up to Americans to recognize that the key to being a healthier nation starts with embracing a healthy lifestyle. A significant portion of healthcare costs are preventable through the long-term adoption of exercise, proper nutrition and wellness programs. Making better choices at home and at the workplace will have an incredible impact on our overall health. At the American Council on Exercise, we will continue our mission to build bridges between the fitness industry and corporate America, provide education and research for the public, and expand our army of well-educated fitness professionals dedicated to empowering Americans to live their most fit lives.”

Despite all the political rhetoric, it is worth remembering that much of our healthcare expenditures could be cut back, if we simply adopted healthier eating and exercise habits. There is a famous cartoon in the old comic strip series Pogo, where the main character has a moment of understanding about human nature and utters the phrase: “We have met the enemy and he is us.”

Whether what many have dubbed “Obamacare” is a good solution to our healthcare problems in this country remains to be seen. Let’s not lose sight of the fact, however, that there is no doubt that we can save money and improve the quality of our lives, if we simply live healthier ones.  All of us have that ability and we don’t need a law or Supreme Court ruling to make it happen.

Dr. Greg Tyler, Esq., is The Sport Digest editor and the Library Director/Archivist at the United States Sports Academy. Before joining the Academy, Tyler practiced law for a number of years. He also currently teaches online classes on sports issues at the Academy and in the past Tyler has lectured on intellectual property law.