NASCAR’s (National Association of Stock Car Auto Racing) Drive for Diversity program has aimed to bring minority drivers into the fast paced world of stock car racing by holding combines since 2004. There are currently six drivers under the program racing in various NASCAR regional series with hopes of expanding that number in future years.1 The number of minority drivers in the program is expected to expand in future years. However, the program has recently come under intense scrutiny due to a lawsuit filed by a former combine participant.

Michael Rodriguez, a Pennsylvania driver, was invited in 2005 to compete in the Drive for Diversity Combine.  He had a stellar background including two karting championships and multiple short track wins.  As a Puerto Rican descent, Rodriguez seems to be a perfect for the program.  However, after arriving at the combine, Rodriguez was not allowed to compete. He claimed that he was unfairly discriminated because of his complexion, fair skin and blue eyes.2 In 2010, Rodriguez filed a lawsuit claiming that NASCAR and Access Communications (the company that oversaw the Drive for Diversity program) violated his civil rights by excluding him from the combine. 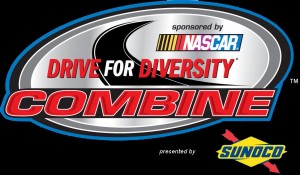 The critical issue of this case is whether drivers’ skin color can be a proper criterion in determining their eligibility for qualifying for an affirmative action plan.  Dhamian Blue, an attorney representing Access Communications, believes so and made the following statement. “NASCAR recognized their need to change the faces of their drivers, the ultimate desire was to pan across pit road and see minority drivers and minority crewmen.  When you talk about changing the face of NASCAR, color weighs very heavily.”3

The parties settled the lawsuit on June 7.  Precise terms of the settlement have not been revealed; but reports are that the plaintiff received around $1 million, plus the right to compete in NASCAR sanctioned events.  Since he has not raced in several years it is unclear whether or not Mr. Rodriguez will actually attempt to compete

NASCAR and Access Communications further argued that Rodriguez’s Civil Rights have not been violated, since Rodriguez was not an employee of the company. His attempt to the combine was strictly voluntary.  A motion for dismissal of the case was made, but the request was denied. The trial is slated to begin on June 4, 2012 in a Charlotte, North Carolina. After issuing the denial of the motion, U.S. District Court Judge Max Cogburn stated that genuine issues of material facts would remain for resolution by a jury.”3

Whether the U.S. District Court rules for the plaintiff (Rodriguez) or the defendant (NASCAR/Access Communications), this case clearly demonstrates the concern for diversity issues within the sport world should be examined critically and carefully.  NASCAR is a reputable international sport entity. If it intends to continue its Drive for Diversity program, the organization must recognize the negative impact of this case and practice more nondiscriminatory and receptive strategies to welcome all kinds of drivers.

The authors believe that NASCAR has a noble intention to diversity the drivers’ racial profile. The inclusion of new minority drivers will attract more diverse audiences at the race track and increase viewership.  However, the traditional way of judging drivers’ ethnicity and character through their outward appearance may pose philosophical and fundamental flaws.

1. Watt, K. (2012). Did the NASCAR Drive for Diversity program discriminate based on looks? A fan’s reaction. Retrieved May 20, 2012 from http://sports.yahoo.com/news/did-nascar-drive-diversity-program-discriminate-based-looks-052800864–nascar.html

2. Pokrass, B. (2012). Driver sues NASCAR, claims he was excluded from diversity program for being ‘too Caucasian’. Retrieved May 20, 2012 from http://aol.sportingnews.com/nascar/story/2012-04-19/nascar-driver-lawsuit-michael-rodriguez-drive-for-diversity