Here we go again. Ahead of Rio and Pyeongchang, when the question of imposing doping crisis-related sanctions on Russia affecting the country’s presence at the Olympic and Paralympic Games arose, the issue set international sports bodies – and observers – at each other’s throats.

Meanwhile, the matter of which Russian athletes got to pursue their Olympic dream in Brazil came to depend partly on what sports they happened to practice.

In 2018, the IOC clashed with the Court of Arbitration for Sport (CAS), with IOC President Thomas Bach reacting to the overturning of sanctions against 28 Russian athletes by talking of an “urgent” need for CAS reform.

The IOC then faced heavy criticism for lifting a suspension of the Russian Olympic Committee (ROC) just three days after the Pyeongchang Olympics ended; and this after they had come under fire for allowing those Russian athletes able to compete at Pyeongchang to do so under the “Olympic Athlete from Russia” name.

What are the chances of avoiding similar destabilising instances of “friendly fire” over Tokyo 2020, Beijing 2022 – and indeed other events – now that WADA’s Compliance Review Committee (CRC) has recommended a long list of “consequences” of the Russian Anti-Doping Agency’s (RUSADA) alleged non-compliance with a requirement to provide an authentic copy of Moscow laboratory data, such consequences to last four years?

The first key hurdle is a WADA Executive Committee meeting to consider the recommendation and proposed consequences in Paris on December 9.

The WADA ExCo is a 12-member body, six of whom are from public authorities and six the Olympic Movement.

To add spice, the meeting will come in the last month of WADA President Sir Craig Reedie’s stewardship – a six-year period in which anti-doping has come to realise, initially I think to its horror, the full strength and scope of the forces ranged against it.

Indeed, this rendezvous in the French capital will presumably be the last ExCo that Sir Craig and a number of other participants attend.

It is probably also worth making the point that the International Standard for Code Compliance by Signatories is a relatively recent instrument, coming into effect after both Rio and Pyeongchang in April 2018.

Since five of the Olympic Movement representatives on the body are current IOC members and one a former IOC member, Tuesday’s IOC statement may be taken as offering important clues as to what the atmosphere in the room will be like and what the main discussion points are likely to be.

I have noted four things worth mentioning.

First, the statement leaves one in no doubt that the IOC accepts the quality of the forensic review that has led the CRC to allege that the Moscow data is “neither complete nor fully authentic”.

But, second, it suggests Lausanne is far from convinced that the ROC or other representatives of the Russian sports movement ought to be sanctioned.

It looks to me that this is one big talking point and area of possible disagreement for December 9.

This might conceivably spill over into discussion of the CRC proposal that Russia not be allowed to host major events for the four years, and be kept out of bidding for the 2032 Olympics and Paralympics.

Here, though, the CRC might counter that hosting is not simply a matter for sports bodies, and can confer very considerable benefits on public authorities.

Thirdly, the two sides – IOC and CRC – are conversely singing from the same song-sheet regarding the handling of Russian athletes.

The CRC propose that Russian athletes and their support personnel be allowed to participate if they can demonstrate that “they are not implicated in any way by the non-compliance”.

The IOC welcome this.

Finally, the tail-end of the IOC statement, where WADA is urged to “refer all these files to the Council of Europe and UNESCO”, is significant.

It might be interpreted as the IOC and the Sports Movement sending out a message to governments along the lines: “Oi! We are doing our bit, even though it causes us pain; shouldn’t you be doing more to help us ensure that fair play prevails?”

Earlier this month, Bach used his speech to the Fifth World Conference on Doping in Sport in Katowice to note that it was “extremely disappointing to hear that the proposed ‘Guidelines and framework on consequences for the UNESCO Convention on Anti-Doping in Sport’ was rejected last week”.

This was, the IOC President said, a “missed opportunity” for government authorities to “step up to their responsibility to sanction everybody who is implicated in a doping case in a robust and deterrent way”.

Even if the CRC recommendations sail through WADA’s ExCo, they are by no means certain to be implemented, since RUSADA will be able to have the matter referred to CAS.

But if WADA’s ultimate policy making body finds the evidence of non-compliance presented by its own panel compelling, then one would hope it can find its way to endorse a robust set of “consequences”.

Should this stretch to what one might term a “blanket ban” of senior ROC officials?

In the past, I have been a staunch defender – stauncher than many – of the principle of individual justice as applied to athletes, whether from Russia or anywhere else.

Here, I am not so sure: performing at major events is the main point of many athletes’ existence; attending them, unless you are assigned chef de mission duties, is essentially an official perk.

This dreary soap opera has been draining sport’s morale – and appeal – for far too long.

The credibility of the fight against doping could ill afford an inconclusive meeting, with ExCo members haggling over which officials should be allowed to attend, or which flags should be flown, at which events.

If they are satisfied that the evidence is robust, it is vital that this hybrid body, joining sport and government, endorse – unanimously and resolutely – a strong response. 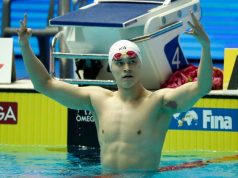 Armour: European Soccer Gives MLB a Lesson in How to Punish Cheaters

Nightengale: Rose Supports MLB in Astros Scandal, Wonders if Players Should be Punished

Sport’s Responsibility in the Coronavirus Pandemic

Self-Care in a New Normal

Organizers Determining Dates for US Olympic Trials After Tokyo 2020 Rescheduling

Vote Now for Sports Academy Athlete of the Month for March