The battle at the top of the women’s overall standings in the Swimming World Cup intensified on the first day of the seventh and final event of the series in Singapore as points leader Sarah Sjöström inflicted the first 100 meter individual medley defeat on rival Katinka Hosszú since 2014.

The Swede, who led by just 15 points coming into the finale of this International Swimming Federation (FINA) event, won in 57.49sec, 0.07 seconds faster than Hungary’s triple Olympic and multiple world champion, who had won her previous 100m individual medley races.

Sjöström followed up with gold in the 50m freestyle in 23.2, ahead of Ranomi Kromowidjojo  of The Netherlands, who clocked 23.46, and Pernille Blume of Denmark, timed at 23.67.

“It is the nature of the race – anything can happen in a race,” Hosszú said of her opening defeat in Singapore’s 3,000-seater OCBC Aquatic Center.

“I think I am still not good at sprint event.”

The overwhelming World Cup men’s point leader, Vladimir Morozov of Russia, confirmed his domination in the 100m individual medley with a time of 50.31, just 0.05 seconds away from his own world record of 50.26 which he tied in Tokyo last week.

Morozov later beat the World Cup record in the 50m freestyle with a time of 20.48, 0.01 seconds faster than he had managed in Tokyo.

Morozov has made a clean sweep of the event in all the seven legs of World Cup this year.

Fighting against jet lag, Schooling was behind from the start and finished fourth in 51.05.

Li Zhuhao of China took the title in 49.64 and Matthew Temple  of Australia swam 50.60 to secure silver.

“Joseph just told me that he was sleepy since he just returned to Singapore, and of course he is not in his best form,” Li said.

“He is a better and stronger swimmer than I am.

“I won the event just by chance.

“I still need to learn from Joseph, because last year he was the winner here and also champion at the Jakarta Asian Games in last September.”

In the men’s 200m backstroke, China’s world champion Xu Jiayu led from start to finish in lane eight, winning in 1:48. 93, beating Mitchell Larkin of Australia, who touched home in 1:49.28.

“I had a rusty morning heat performance and was almost out of the final,” Xu, who set a world record in the 100m backstroke in Tokyo last weekend in 48.88, said.

“I felt upset for a while but fortunately I made the eight to the final.

“I could not let the winning opportunity running away from me anymore in the final.

“So I tried hard from the start to the end.”

In the absence of rival Kirill Prigoda of Russia, who stands a distant second in the overall men’s standings, Yan Zibei of China swam his personal best of 56.34 to win the men’s 100m breaststroke, beating Anton Chupkov of Russia, who clocked 56.69, and Ilya Shymanovich  of Belarus, timed at 56.81.

Olympic champion Mack Horton of Australia earned a narrow victory in the men’s 400m freestyle in 3:41.44, edging out Velimir Stjepanovic of Serbia, timed at 3:41.52,  and Blake Pieroni of the United States, who finished in 3:41.94.

“I was expecting to swim a faster time but it was a close game especially in the last 50 metres,” Horton, a winner earlier in the series in the Eindhoven, Budapest and Tokyo legs.

“Three of us changed the lead in the first 350m and my win came from the strong finish.”

Republshed with permission from insidethegames.biz. 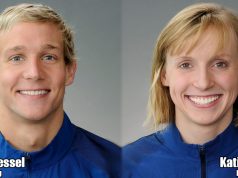