I am from that generation of which everyone remembers where they were when they heard the news that President Kennedy had been shot. There are two other events that fall into that category for me. One was September 11, 2001 and the other was June 9, 1973 – 44 years ago today. On that day, I saw the greatest athletic performance in the history of sports; Secretariat’s Belmont!

I was a college student working at Red Lobster. I convinced my boss that I needed to take a break from 5:20 – 6 on a Saturday night; not an easy thing to swing in the restaurant business. I hurried home (it was about an eight minute drive), ran across the front yard, ran into the house and literally slid along the floor in front of the TV just in time to hear Chic Anderson say, “and they’re off.”

What happened in the next 2 minutes and 24 seconds was pure magic. Secretariat demolished a field of five of that year’s best horses by an incredible 31 lengths. As Anderson said at the finish, “an unbelievable, an amazing performance!” Even more impressive than the 31 lengths was the time – 2:24, which shattered the existing WORLD RECORD for the 1.5 mile distance by 2 3/5 seconds. By the way, even with all the upgrades in training methods, nutrition, and the emergence of synthetic track surfaces, Big Red’s 2:24 is still the world record 44 years later.

To put Secretariats performance into perspective, based on the times, he would have beat American Pharoah, the 2015 Triple Crown winner by 13 lengths. In addition, he would have beat the other two Triple Crown winners between 1973 and 2015, Seattle Slew and Affirmed by 23 and 14 lengths respectively. Secretariat so dominated the entire mile and a half distance, that he still holds the Belmont Stakes record for the ½ mile, ¾ mile, 1 mile, and 1 ¼ mile splits. It truly was the greatest performance ever.

When ESPN did the Greatest Athletes of the 20th Century, a lot of people were upset that Secretariat was included in the Top 50. I too was upset, not because ESPN had included a horse among the Top 50 athletes; but how in the world could he be #35?! Why he was not in the Top 5 will always be a mystery to me. By any definition, a race horse is an athlete and he was the greatest athlete I ever saw – #35 is absurd!!

Tomorrow marks the 149th running of the Belmont Stakes and we will not have a Triple Crown winner this year, but sometime tomorrow they will show a replay of the 1973 Belmont and I will get goose bumps and cry just like I always do. As you prepare to watch the race tomorrow think about this, in the 16 Belmont Stakes run so far in the 21st Century, the combined margin of victory was 35 lengths. Secretariat won by 31!

Dr. Steve Butler is the Dean of Academic Affairs at the United States Sports Academy, has seen the movie Secretariat over 100 times and has read every book ever written about Big Red. Reach him at sbutler@ussa.edu. 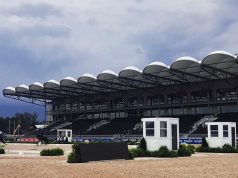