The United States Sports Academy has announced its Athlete of the Month ballot for November and public voting is in progress. Following the selection committee’s meeting, 12 candidates – six male and six female – from seven countries comprise the list. 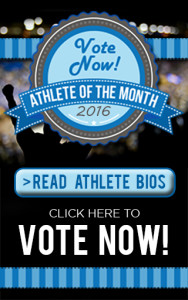 ademy’s prestigious Athlete of the Year award. Everyone is encouraged to cast a vote on the Academy’s website here and have friends do the same. The full ballot is listed along with bios of what each athlete accomplished during the month. Voting will continue until Thursday, 15 December 2016.

This is the 32nd year of the Academy’s Athlete of the Year program, part of the institution’s annual Awards of Sport program. Each month, the public is invited to participate by nominating and voting for the male and female Athletes of the Month on the Academy’s website. Monthly winners become eligible for the prestigious Athlete of the Year honor, which is selected at year end by online public balloting. Monthly and annual winners are announced on the Academy’s website, social media, and in the monthly e-newsletter, The Sport Update.

Eric Mann is the communications assistant at the United States Sports Academy. He can be reached at emann@ussa.edu.

Vote Now for Academy September Athletes of the Month