The use of the anchored putter to win major golf tournaments is the topic in golf.

An increasing number of professionals use the belly putter, including three of the last five major champions beginning with Keegan Bradley at the 2011 PGA Championship.

The United States Golf Association (USGA) and Royal & Ancient Golf Club (R & A) proposed a rule change prohibiting anchored putting in November. (www.usga.org, November 28, 2012) The rule would regulate the method of putting exclusive of putter length at all levels beginning in 2016. This rule change would potentially affect players, sponsors, records, putting styles, and growth at all levels including the PGA Tour. 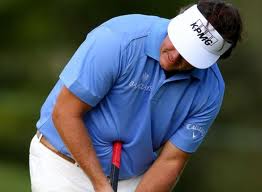 The basic technique anchors the putter to a fixed part of the body such as the chin, sternum or belly. One view is to allow the long anchored putter. For example, in a survey of 4,228 club professionals, 63 percent had “serious concerns” about the ban. (Hoggard, 2013). In this regard, golfers are free to experiment with putting styles within the rules. Some suggest considering one set of rules for the professional level, and another set for the amateurs (Hoggard, 2013).

The anchored putter and other modified putting strokes have been around the golf world for years. For example, Phil Rodgers made a run at the 1966 British Open title using an anchored putter, eventually won by Jack Nicklaus. On the 72nd green of the 1933 British Open, Leo Diegel whiffed (‘an air shot” – Bernard Darwin) a short putt using a crunching style to counter the “yips” to finish one shot out of a playoff. Sam Snead used several modified putting styles which ironically resulted in no major championships and subsequent rule changes.

Long putters became more popular on the Champions Tour in the 1980s followed by the PGA Tour. Rocco Mediate won with a long putter on the 1991 PGA Tour. Paul Azinger won in 2000 with a belly putter with numerous victories recorded by others in a similar manner since then.

“One of the most fundamental things about the game of golf is we believe the player should hold the club away from his body and swing it freely,” said Mike Davis, the executive director of the United States Golf Association. “We think this is integral to the traditions of the game.” (Harig, 2012)

With the anchored putter, the club head is still swinging freely. If score and enjoyment improve by using a long or belly putter with the end moving freely, then why remove it? According to Ted Bishop, The PGA of America President: “We have got 27,000 PGA members that are fighting a battle every day at all their facilities to try to grow the game…Quite candidly, we are at a point in the game where we can’t afford to lose one player, one round of golf…from a legislation standpoint to do that in our opinion is not good for the game.” (Hoggard, 2013)