Sports writer and educator David Gallahue understands athletics the way a great musician appreciates music: He sees it for its emotions, its ability to captivate and inspire, enliven and thrill, and literally move the body, psyche, mind, and soul.

When a great violinist plays Beethoven’s Violin Concerto in D, it is not notes on a page, nor are those notes executed to be an accurate recital; indeed, for the great musician there are no notes at all. Instead, there is a flow of expression as natural as dinner conversation between trusted lovers. The great musician does not think of the notes any more than our two conversationalists wonder what the letters of their soulful communication would look like if they were to be somehow recorded, let alone worry if all of those words would be spelled properly. Gallahue points out that the great athlete also participates in the same phenomenon.

An individual’s intentions, his feeling, whatever it was that so moved him to expression, in a word, his style, cannot be learned.  Style, be it verbal, musical, or athletic, comes from the soul. It is a function of the mood and of the moment, and it is most pronounced when we are not thinking about it – when we are honest and sincere, so beside ourselves with emotion that we cannot and do not wait to be seen and heard. Novice athletes may struggle to emulate the style of the greats, but at most they’ll improve their coordination; those players who do not truly appreciate, as Gallahue does, the artistry of sports, may endlessly pound the bags, run he laps, juggle the tennis balls, and push the weights, but at most they will be well-drilled. Gallahue is one of the few athletics writers who knows that sports are not important because they strengthen our bodies. Rather, sports are important because they are a form of human expression, a form of expression beautiful because it breaks the bonds of language.

One-on-one games such as tennis are exercises in a two-way push/pull exchange. Team sports are a microcosm of social studies and political science; it is no wonder why patriotism runs high at international soccer events, why Hitler was embarrassed and disturbed by superior American runner Jesse Owens, and why countries use the Olympics as an opportunity for conscience statements. Solo sports, perhaps, have the most profound implications. Bodybuilders must constantly struggle with limitations of self, both real and imagined. Open ocean swimmers must enjoy their own company long enough to push through a tiring, repetitive and entirely lonely task while still remaining focused. “The Kingdom of Heaven is within,” says Christ in the Seventeenth Chapter of Luke; ask any mountain climber who has done time pitting himself against a sheer cliff face, and he will tell you that there is many-a-moment when it is indeed just the rock, himself, and God.

The self-knowledge that comes out of being in such a situation is the most valuable consequence of any education. Quite so, self-knowledge is tantamount to the definition of education itself. The founders of teaching in the Western tradition, Socrates and Plato, espoused the maxim, “Know thyself.” If, as professional teachers, our goal is to help students know themselves, then athletics cannot be left out of the curriculum. Indeed, few other disciplines train their disciples to truly meet, understand, and overcome themselves as does athletics. Athletic participation forces the participant to live in the ever-important here and now. The sum of the individual is expressed and exposed, revealed both to the self and to the world, when an athlete puts all of his or herself into the sport. To know the self in context of a do-or-die athlete is to know the self virtually in its entirety.

Troy Cantrell grew up in Southern California lifeguarding, playing tennis, and performing in community theater. In his 25-year career as an educator, he has taught various subjects to students from five continents, ranging in age from 7 to 70.  For the past 17 years, he has worked for San Francisco Unified School District.  He lives in the Bay Area with his wife and children. 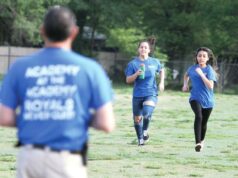 Do Female Athletes Choose Different Uniforms than their Male Counterparts?