Organizers of the World Equestrian Games have implemented strategic and emergency plans for the event should it be affected by extreme weather as a result of Hurricane Florence as Tryon, N.C., prepares to host the event.

Hurricane Florence, a category four storm, is expected to pose a considerable threat to lives and property when it hits parts of the southeastern and mid-Atlantic United States later this week.

A state of emergency has already been declared in North and South Carolina, as well as Virginia, in preparation for the hurricane’s arrival, with over a million people facing mandatory evacuation orders.

Tryon is located in North Carolina but the National Weather Service (NWS) has said the “currently forecasted track of Florence keeps the World Equestrian Games site well west of the circulation centre”.

The NWS has warned of “numerous thunderstorms” throughout the week, however, which could cause severe disruption to the event at the Tryon International Equestrian Center (TIEC).

In a statement, organisers of the event – scheduled to begin later today with the Opening Ceremony before competition starts tomorrow – insisted they had the necessary precautions in place to deal with the anticipated adverse weather. 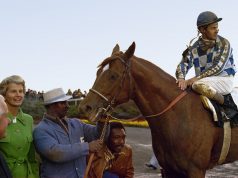