Every late April and mid – October, a race track known as Talladega Super Speedway comes alive, especially in the Infield.

Talladega Super Speedway is a race track that is 2.66 miles in length and has banking as steep as 33 degrees. The track hosts the Arca Series, Camping World Truck Series, Xfinity Series, and The Monster Energy NASCAR Cup Series. Talladega Super Speedway is famous for being the biggest, fastest, and longest oval track on the NASCAR circuit. The track is also notorious for crashes, high speeds reaching over 190 mph, and for the track’s infield hosting, of the Biggest Party in NASCAR that carries a Mardi Gras party atmosphere.

The track and especially the infield attract people from all over the United States as well as other countries. Talladega’s infield opens on Wednesday at 9 a.m. and that is when thousands of campers descend into the infield, setting up their camping sites and getting ready to enjoy the time of their lives.

The infield will slowly start to come alive and as race weekend approaches, the campsites will become completely full, mostly populated with large shiny camping trailers. The term camping can be used lightly as many of these trailers have the comforts of home.  The infield is replete with a variety of groups that regularly attends the race and the infield parties. As you walk around the track you will observe people taking care of each other, like putting on a fish fry and choreographing parties that consist of scheduling and hosting live music. Although it’s famous for the Dega’s Boulevard Party on Friday night commonly known as the Big One on the Boulevard, the infield is more encompassing than that now.

I had the opportunity to meet the TALLA-DAMN-DEGA Infield Regulars who host a fish fry and an annual poker tournament that raises funds for needy families. One would be amazed how kind and open all the TALLA-DAMN-DEGA Infield Regulars are, along with being well organized. This group has their own flag that flies over their camp sites. They consider everyone family and through Facebook stay in contact with each other throughout the year.

Friday night the famous Dega Boulevard becomes lively, and one will see thousands of people walking down the Boulevard. There is one famous camp site known as the Dega Do Club whose members dress in costumes regaling all who approach their camp site. The Dega Do Club consists of fire fighters and trades people. They have gotten so big and famous that they are sponsored by Monster Energy.  During the Dega Boulevard party the Dega Do Club will give out samples of everything, including alcoholic beverages. All they ask is that you just leave a tip.

As the Mardi Gras atmosphere becomes fever pitched, you will see corporate sponsored contests and stock car drivers making cameo appearances. Up on Eastaboga Boulevard you will run into the Dega Nation Group that has live music and drinks all the time, with a friendly Southern hospitality. They will even let you stand on the decking on top of their trailer which allows you to see the entire race track. Both groups will tell you that it takes many people and lots of planning hours to put on these parties which last over a three-day period.

What stands out the most is how very kind the people are and how many people have had the Talladega’s Infield experience on their bucket list for years. You will be amazed to see how people look out for each other when they are leaving the track to get supplies, and they will ask you if you need anything. I met a couple from Ohio who offered to do just that for us when we needed some supplies. They also brought a friend with them to see the track and experience the Dega infield atmosphere, and to check it off his or her bucket list.

As I was sitting on the back stretch of Talladega Super Speedway surrounded by fans watching the last race of the weekend, I had an opportunity to have a conversation with the FOX camera crew, who took their personal time to answer a few questions that I had. During the whole time in the infield I was surprised how there was an absence of vitriolic political debate, but rather people enjoying each other’s company for three days. Although some people may feel that NASCAR and the Talladega Experience is a just a Southern white man’s sport, it truly is not. It’s a weekend event that will bring thousands of people together from all across the United States, no matter how they might differ otherwise. It’s an event, some consider it a party, that everyone enjoys. Oh, by the way, with all that is going on in the infield you still will have an opportunity to see the races and that’s the main reason for coming.

Dr. Matthew Williams is an Associate Professor of Sport Management at The University of Virginia’s College at Wise and is an avid NASCAR fan. 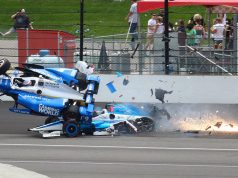