There’s a bit of a contretemps in the sporting world over an event at a softball game between Alabama and Mississippi. A player for Alabama, Bailey Hemphill, hit a home run to apparently tie the game but then failed to step on home plate. Mississippi catcher Courtney Syrett along with the umpire noticed the mistake. The alert catcher called for the ball once it was put back in play and tagged Hemphill. As they say in baseball, “Yer Out!”

I wasn’t going to write anything about this until I saw some talking heads lamenting how the umpire ruined the game and the unfairness of it all. That Hemphill hit the home run and touching the plate was a formality. Bah humbug, says this fan. I wonder what the sportscasters would say if she missed first base? The point is she has to touch the bases. That’s the rule and it’s a good rule.

Frankly, I’m opposed to all the teammates crowding around the plate after a player hits a home run anyway. I’m against it even for a game winning home run and I’m really, wholeheartedly against it when it is still the middle of the game, as it was in this case.

The rules are clear. You have to touch all three bases and home plate. Hemphill did not, she’s out. It doesn’t even seem like it should be a controversy to me. Anyone who has ever played baseball knows this rule. It’s one of the first things they taught me when I played Little League ball as a lad. Another one is that you have to touch first base after a single even if the winning run scores on a base hit. If you immediately run off and congratulate the runner, the other team can throw to first base and you are out.

The same rule applies with sacrifice flies. If you leave too early, the other team notices it, and throws over to the base once the ball is back in play, O-U-T.

What strikes me most about this situation is what I perceive to be sexism. If this was Major League Baseball I find it difficult to believe anyone would be arguing that it should be a home run. I think the perception is college softball is just a fun game and the umpires should give the girl a break. I’m here to tell you, I know some top-level softball players, they are not kidding around. They are outstanding athletes and compete as hard as anyone. They know the rules and are as subject to them as anyone else.

It’s not the end of the world for anyone involved but I’m completely on the side of the umpire in this case. Good call. Keep up the excellent work.

As far as Hemphill and Alabama are concerned, lesson learned. They’ll play again another day. 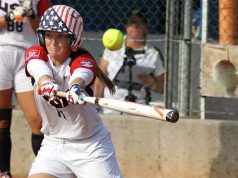 Olympic Qualification on the Line at Women’s Softball World Championship 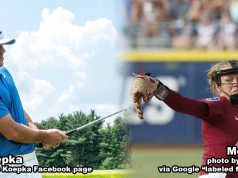 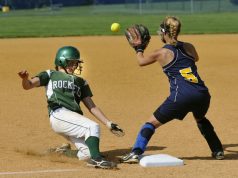