The uproar over Antonio Brown’s Facebook Live video continued for a second day Tuesday, and odds are it will rage for the rest of the week. There will be Brown’s mea culpa and his response to Mike Tomlin’s criticism and punishment. Then his teammates will be asked to weigh in.

Meanwhile, in New England, Patriots coach Bill Belichick and his players will be asked no less than a million times how they feel about being called “a——-.”

It will be an echo chamber of nonsense, the leadup to the AFC Championship Game hijacked by a stunt even a seventh-grader would consider lame.

“We realize that there are four teams working this week, and there are 28 watching. We realize there are the same amount of television and radio shows that there normally are,” Tomlin said Tuesday. “So there is a certain intensity that comes with being in this tournament. They have to fill that air time with something.”

And therein lies the problem with Brown’s lapse in judgment.

What Tomlin said to his team when he thought they were behind closed doors – or closed screens, in this case – is no different than what’s heard in locker rooms across every sport. Coaches and players are passionate about the games they play, and nothing gets them fired up more than an “us against them” mentality.

As for Tomlin’s profanity, that is locker room talk. And a mild version of it at that.

But by broadcasting Tomlin’s speech without his coach’s knowledge — as a player was heard warning his teammates to keep a low profile on social media, no less! — Brown took the focus off his team and made the biggest game of the Steelers season all about him. Instead of stories about matchups and legacies and Pittsburgh’s rebound from a mid-season slump, it is now all about Brown.

Had this been a first offense, Tomlin might not have been so livid. But this has become a pattern for Brown, who might as well have recurring payments set up to the league office for as many times as he’s been fined for end-zone celebrations and uniform code violations.

Brown is a spectacularly talented receiver, finishing second in the league in both receptions (106) and touchdowns (12), and fourth in yards per game (85.6). That’s even with Tomlin resting him, Ben Roethlisberger and Le’Veon Bell in the season finale.

But too often it’s Brown’s antics that get the attention, and it’s that aspect that seems to infuriate Tomlin the most.

“But larger than that, he has to grow from this. He has to,” Tomlin said. “He works extremely hard. He is extremely talented. Those things get minimized with incidences such as this. You wear on your teammates when they routinely have to answer questions about things that aren’t preparation or football-related.

“He is a great player. He is a hardworking player. He is respected, largely, in the locker room for those things. But incidences such as this, don’t help him in that regard,” Tomlin added. “That’s just the reality of it.”

Tomlin then raised some eyebrows by making a reference to Brown’s future with the Steelers, suggesting that his immaturity could jeopardize it.

“That’s why oftentimes you see great players move around from team to team,” Tomlin said. “And I definitely don’t want that to be his story.”

Harsh, but true. Think Terrell Owens played for five different teams during his 15-year career because he wanted to see the country? Or that Randy Moss was trying to collect as many team jerseys as he could?

Brown isn’t volatile, like T.O. and Moss were. But the NFL has little patience for outsized personalities – it’s not called the No Fun League for nothing — and a sliding scale for the acts of immaturity it will tolerate. By any measure, Brown’s video tested those limits.

That a video of a locker room speech will wind up being a theme of the AFC Championship is ridiculous. But so, too, the idea that Brown could do this and not find himself at the center of another firestorm.

A player can be a star in the NFL or a sideshow. It’s up to Brown to decide which he wants to be. 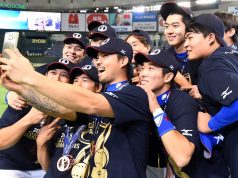